For those who don’t know, the Mr Men are a series of books written by Roger Hargreaves for small children. 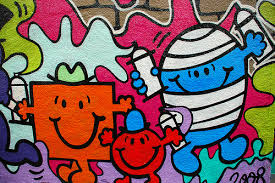 Some may read the news that Michael Gove has been criticising lesson plans that use Mr Men to teach history with resignation. Here he is again – the Mr Grumpy of education – taking all the fun out of our lessons.

But is that fair? He complains about the infantilisation of history teaching, so surely that makes Michael more like Mr Clever, trying to use his knowledge to benefit his fellows. But as we learn from the story –  Mr. Clever is also very smug. He believes that no one can get the better of him, because of his superior intelligence. That doesn’t sound like Mr Gove.

Others would like Michael to be like Mr Bump so that his next mistake might be one accident too many and cause him to lose his job.

From my perspective, I see Michael Gove as being more like Mr Tickle – he likes to gives us the odd prod every now and again, just to keep us on our toes.

Anyway. This is all silly – using fictional characters to represent real people? What next? Metaphor? Let’s just stick to the facts.

How about you, which Mr Man do you most associate with Michael Gove? If you can’t be bothered to respond to this post, you could always vote on this Guardian poll, although typically the Guardian haven’t provided the most pertinent choices.

2 thoughts on “Which Mr Man is Michael Gove anyway?”